Charlie Munger is known for his blunt wit and investing insight, and his intellect has not gotten any duller with age. We can all learn from his insights from today’s Daily Journal annual meeting both in investing and in life.

It was the femoral artery of a rat that piqued the curiosity of Gary Guthart. Then a new hire at a research institute spun from ­Stanford University, he was assigned to a surgical robotics lab. He was asked to sew a severed artery back together by hand, and then to try it again with a prototype robot.

“That’s what people have to do in surgery?” Guthart recalls thinking. “That looks like both a really interesting, important problem and a really hard ­problem, and that got me really excited.” 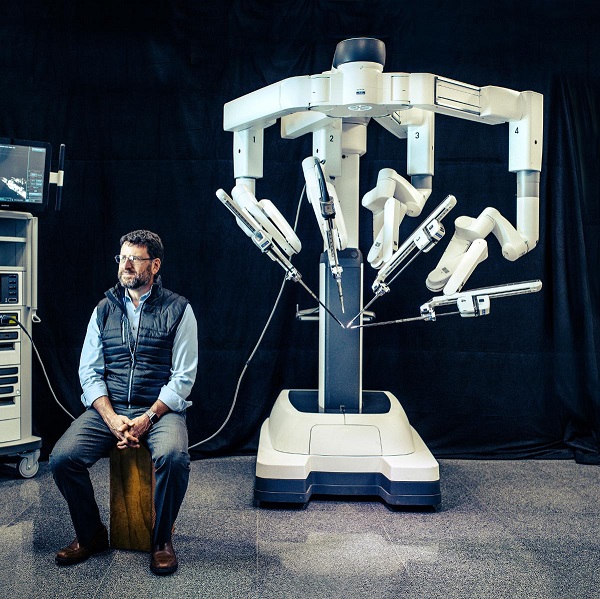 Three years later, in 1996, Guthart was working at a startup called Intuitive Surgical, which had licensed technology from the institute, SRI International. Intuitive launched a robotic surgical helper, branded da Vinci, in 1998. The da Vinci would go on to change surgery in the same way the iPhone has transformed cellphone use.

Today, nearly 5,000 da Vincis are in operating rooms, used in one million surgeries per year. Intuitive went public just after the tech bubble peaked in 2000, and still the stock ended the dec­ade 17 times higher than at its IPO. Why? Because, until now, Intuitive has had the business to itself. The price tag on a da Vinci is about $1.5 million. Plus, it sells about $1,900 in replacement parts per operation. The company’s 30% net profit margin eclipses Microsoft’s.

Guthart, 53, has been chief executive since 2010 and is sitting on $315 million worth of Intuitive stock and options based on February 13 closing prices. But now he’s going to have to work a little harder. Medtronic, a medical-device maker with sales eight times Intuitive’s, and Verb Surgical, a partnership between Johnson & Johnson and Alphabet, are expected to enter the surgery robot market in the next year. They’re likely to compete on price. And these heavyweights are also making inroads into Intuitive’s future markets: J&J announced Wednesday that it would pay $3.4 billion in cash for Auris Health, a rival robotics startup with a device to perform lung biopsies.

There’s another problem, much like the one that caused Apple to recently warn on sales: After a period of explosive growth, a pioneer confronts saturation in its original markets. A plateauing of sales is inevitable. Morningstar analyst Alex Morozov expects Intuitive’s rich multiple (38 times expected 2019 net) to come down. He rates the stock a sell.

And yet Guthart and Intuitive have somehow defied gravity so far. In 2012, a national advisory panel declared that some prostate cancer screening (and the resulting surgeries) did more harm than good; still, prostatectomies are common, and Intuitive’s machine is used in at least 80% of them. Last year the company increased its revenue 19% to $3.7 billion, on which it netted $1.1 billion. Guthart is moving into new territory with a machine to help doctors inspect lungs for cancer. He is expanding abroad. He is pushing the da Vinci into stomach-shrinking surgery.

Guthart, the son of a defense engineer and a science teacher, grew up in Sunnyvale, California, just a few miles from where Intuitive’s headquarters now lie. His high school math teacher snagged him an internship writing code at a NASA research operation, where he was the youngest person in the lab. He got engineering degrees at UC Berkeley and Caltech, with dreams of becoming an academic. But a professor turned him down for a postdoc. “I think you’re a bright enough person,” Guthart remembers him saying. “But I don’t think you would make a good professor. You don’t like to write, and you spend a lot of time chatting with people.”

Two months later Guthart found a job at SRI, where he was drafted by a robotics startup founded by surgeon Frederic Moll, engineer Robert Younge and venture capitalist John Freund. They licensed technology from the research institute, which had received funding from the Defense Department to build a system that would enable a surgeon to operate a battlefield robot remotely. That idea never panned out, but the startup, Intuitive Surgical, had plans to improve minimally invasive surgery, a new technique at the time.

In 1998 surgeons used the da Vinci to perform what the company reported to be the world’s first computer-enhanced closed-chest heart surgeries, like mitral-valve repair. But robotic cardiac procedures didn’t get a big uptake in a market where doctors were focused on a different medical innovation: heart stents.

In 2001 the da Vinci got a big break when the Food & Drug Administration cleared it for prostate surgery. Dr. Ben Davies, a professor of urology at the University of Pittsburgh School of Medicine, has been using it for the six to seven prostatectomies he’s been doing every week for the past decade. Before the robot came along, he says, this very invasive open procedure would be a challenge because the prostate gland is surrounded by sensitive parts of the body that need to be delicately dissected. The result could be lots of blood loss. With robotics, the doctor operates the precise controls while watching a feed from a camera set inside the patient. Blood loss is “min­us­cule,” Davies says.

Sales dipped in 2014, after the bad review of prostate screening and a warning about robotic hysterectomies from the head of the major U.S. professional group for ob/gyns. Intuitive got back on track by expanding into hernia repairs, which accounted for 12% of da Vinci procedures in 2017, according to one analyst’s estimate. But then there was yet another complication. The New England Journal of Medicine published two studies showing that women who had a minimally invasive hysterectomy—whether robotic or not—to treat early-stage cervical cancer were more likely to die later of the disease than they were with open surgery. While radical hysterectomy to treat cervical cancer is not a huge portion of Intuitive’s business, Guthart told investors in January he expects some impact.

What’s Guthart going to do about the new competitors, which could attack all of Intuitive’s markets? Its first-mover advantage should help for a while. Hospitals invest in training and equipment for the da Vinci, which could make it harder for them to switch. Intuitive is adding features to the da Vinci that seem plucked from a medical bag of healthcare buzzwords: augmented reality, big data analytics and artificial intelligence, advances aimed at keeping Intuitive’s technology in the lead.

Still, Guthart aims to take the company beyond the da Vinci. The Ion is a robotic-assisted bronchoscope awaiting FDA clearance. Guthart says the device could have helped his mother when she was successfully treated for lung cancer seven years ago. Someday, the tool might become a way to destroy cancer cells inside the lung, much as gastroenterologists can both detect and remove precancerous polyps during a colonoscopy.

But this time Intuitive won’t be the first to market. In 2003, Moll left the company he had cofounded and later started Auris Health, attracting more than $700 million in venture capital. Auris received FDA clearance in March 2018 for a device to perform lung biopsies. Intuitive has sued, alleging patent infringement, and Guthart says he’s not in regular contact with his former boss, whose company denies the charges. The case is pending. All things considered, it’s fair to expect Guthart’s next nine years to be more of a battle than his last nine.

A version of this story appears in the February 28, 2019 issue of Forbes.

Michela Tindera – Forbes Staff- Reporting on the business of healthcare and medicine, with earlier stints on the Forbes wealth team and editing the Forbes 30 Under 30 Europe lists. Pre-Forbes I interned at the Culture desk of The New York Times.